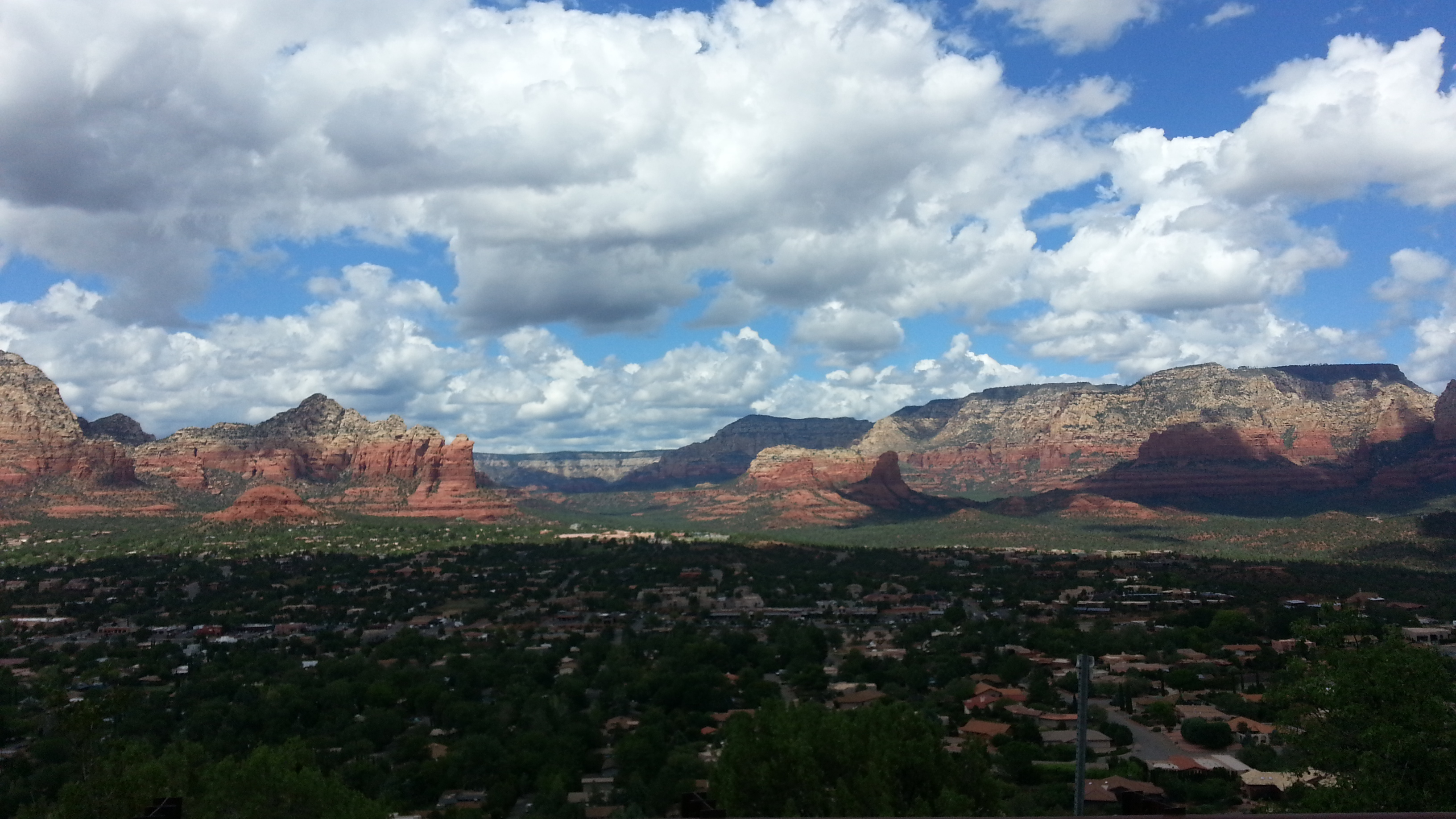 This is a real photo taken with my Samsung Galaxy S3. As I look at it now it looks unreal. But that is the surreal beauty of this earth! It looks like something from the imagination sometimes, like something we might make up, like something an artist might create. And of course it is something that an artist created, I guess.

Today we live full-time in our RV. Before we were married we talked about traveling the country once we retired. So the idea was not a new one for us. But we are still a good way from retirement age. After I found myself working from home and the kids were being homeschooled, it hit me that we could make our home anywhere. That didn’t mean we should do it or that we would be able to do it. Major decisions had to be made. Some questions had to be asked, or even thought of. We had a long way to go.

I can do all things through Christ which strengtheneth me (Philipians 4:13).

We had never even spent a night in an RV. We had a lot of questions we needed to answer (personal ones), and we had a lot of questions we needed to find answers to, questions about others experiences etc.. Some questions we didn’t even know we had until they came up during research. First, we knew we needed to know about costs, spaces for our teenaged boys, what sorts of issues might arise, what tools will we need, what accessories will we need, how will we pack all our lives into 400 square feet. As we were researching we found answers, but we also realized we had more questions. We still do not know all the questions, and we certainly do not know all the answers. But we obviously found answers sufficient to make the decisions we needed to make. The most important question we had was, “Are we supposed to do this?”

All the while, as we discovered the costs and other issues we were finding, we really felt like we were not going to be able to do it. The wife was pretty adamant that we could not do it. For her it was more than buying an RV and packing up and going, it was leaving friends; good, important friends. It was not having a place to return to, not having a home. It was going to be hard for our youngest son for the same reason. Were we doing the right thing for the kids? We were very torn about the whole thing.

But I continued to seek guidance even if we had basically given up on the idea. I was frustrated and disappointed. I frequently turned to God in prayer. I asked Him for guidance, “What should we do? What do you want us to do? Where should we be?” He answered one morning, “Buy an RV.” I laughed, “How?!?” I knew, though, that if we allowed it, He would direct us and show us the way.

So we looked again at used RVs. We expanded our search to include used 5th wheels. We were still struggling with the how of the whole thing. And the wife was convinced we should not be doing it. I assured her many times, “We were told to do it! It isn’t me pushing this. God said, ‘Buy an RV.'” We were given the idea that with our cash and our vehicles we might be able to swing this. We could work a trade of the vehicles for a truck, and then use the cash we had to put down for the RV. God had shown us the way, as usual.

At this time we thought we would need a toy hauler so that we could have separate spaces for the boys. There was one with a loft that we thought the younger one could make his space. The garage could be split for the twins. When we went to see it the loft was just too short top to bottom. Our son would not have been able to sit up in it. Disappointed again.

If we were going to buy a 5th wheel we needed to have something to tow it with. We really didn’t know how much truck we needed. I have almost always driven Fords, though I have had Hondas and a Dodge in the past. But we went straight to the Ford dealer in SW Houston. We looked at the Super Duty trucks and figured we needed an F250. We didn’t know if we should get the short bed or the long one. We liked the Platinum, but thought we might get the next one down just for cost sake. Because we were unsure of what to get we decided to ask someone who might know. But we don’t know any such person. So we spent some time driving through RV parks and resorts. One morning we ran into a man who had a big Ford F450 dually. I got out and talked with him a bit. He was very nice and helpful. He offered advice that we did our best to follow. He said to get the most truck you can afford and to get the long bed. Get the dually if you can. So, we went back to the Ford dealer (Helfman on SW Freeway). They had a F350 dually King Ranch model. We negotiated a price and bought it trading in both our Honda Odyssey and Ford Focus. We really loved both of those cars. But the truck is amazing.

After we bought the truck we thought we could get better financing on a new RV. We decided to have a look at new 5th wheels. We had no idea really how much we could get for the money. We were driving to Katy, TX to Camping World when we decided to stop at Holiday World which is right down the road from Camping World, and from the direction we were coming (from the west), it was first. We met with Mandy Hajek. She was friendly and willing to answer all of our questions. She is a camper with lots of experience. So we felt free to ask about things we might not have know to even ask. She was very helpful. She showed us a couple of units trying to help us find what we might need based on what we could tell her. Of course, we were not real sure of what we needed. We knew what we thought we wanted, but what did we HAVE to have? We didn’t know.

She showed us a Keystone Sprinter Wide Body 5th wheel Bunkhouse. It has 2 full bathrooms and 2 bedrooms. It does not have a residential refrigerator. It does not have a washer/dryer. It could have spaces for each of us. I was not super impressed, but the wife seemed to me to think it was the right one.

After receiving the prompting to “Buy an RV,” I knew we would do it if I could make my wife understand that it is what Heavenly Father told us to do. I also knew we would be shown a way to get it done. Though it took a lot of work to accomplish it, I think that the wife was still not convinced. She is a wonderful gal and even with her misgivings she went along. As we have been out now for about 6 months she says, when asked, that she is getting used to it. I think she is actually enjoying it. I am grateful for her trust and for the guidance and comfort we receive from our Father in Heaven. And I am grateful to know, that as we turn to Him, He will guide us. And as we follow faithfully we will not be led astray.